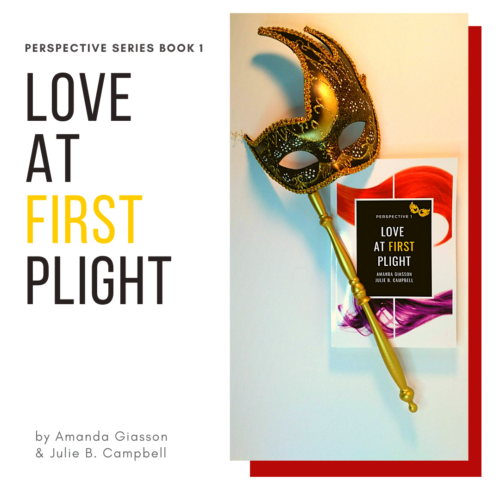 If you’ve been following us on Facebook, Twitter, or Instagram (thank you!), then you might have noticed that we re-released Love at First Plight – Perspective series book 1 – at the start of this year.  Well, at least if the algorithms happened to choose to show you those posts…but griping about social media’s merits and deficiencies is a topic for another day. Anyhoo…

Amanda Giasson and I (this post was written by Julie B. Campbell) have wanted to re-release Love at First Plight for at least a couple of years.  Back in 2018, we did technically do it, because we relaunched the entire series’ covers along with the publication of the third novel, Third Time’s a Charmer.  But Perspective series book 1 still needed work.  Last year in May, one month after So On and So Fourth was published, we decided it was time to step back and look at Perspective series book 1.

If we wanted to make the changes to book 1 of the Perspective series that we’d always wanted to make, we’d reached a now-or-never situation. Let’s face it, we’re not huge yet.  We might as well fix what needs to be fixed before the series reaches Harry Potter-level popularity.  So, before we could get too lost in writing the fifth novel, we decided on now, not never. That said, we’re definitely looking forward to attending the one-day opening of Qarradune World theme park. You’ll love visiting Syliza Land and Kavylak Land! Don’t worry, all rides will be ballgown friendly.

Our first decision was to update the cover. It was a subtle change but an important one.  Until Third Time’s a Charmer was published, each of the novel covers was based on a similar appearance, with the titles and symbols appearing inside a rectangle in the centre. Each novel had a different color for its rectangle: Love at First Plight was black, Second Wind was navy blue, and Third Time’s a Charmer was dark red.

This worked great…in theory.  The problem was that in order to make the titles stand out against their colored backgrounds, the colors we chose had to be quite dark.  That still worked great…in theory.  What we noticed was that in our event displays, there wasn’t enough of a difference from one title to the next to make it clear at a glance that there were several different novels instead of just one.

What was even more surprising was what happened to my own personal copies of the books. I (proudly) display my books facing outward on my bookshelf, which is not too far from a large window.  After a bit of time (indirectly) exposed to daylight, the rectangle colors darkened. By late 2020, the colors for Perspective series books 1, 2, and 3 were indistinguishable from each other!

When we published So On and So Fourth, we tried to overcome that issue by changing the color of the lettering instead of the rectangle, which we left black.  We loved the effect, but not that it broke the consistency from one book to the next in the Perspective series.

After a lot of discussions, tweaking, and fussing, we came up with the new cover for Love at First Plight. We plan to use the same colour strategy for the rest of the Perspective series books, which will also be re-released in the near future for that reason.

Love at First Plight is, in my humble opinion, an absolutely fantastic story and a beautiful start to the Perspective series books. For that reason, the fact that there were more than a handful of typos left behind made me cringe.  The story deserved better! So, we spent nearly 8 months in a team reviewing, proofing, rereading, and discussing every word. The difference is amazing. The cringe factor is gone. This novel is written as we’d wanted it to be from the very beginning.

Language – and Our Understanding of it – Changed

Six years passed between the initial publication of Perspective series book 1 and our recent re-launch of Love at First Plight. Language changes a lot in that length of time.  That said, I think we can all agree that language changed a lot more than it usually would have during that specific span of six years. Since we were updating the book by editing out the typos anyway, we took the opportunity to make especially sure that what Megan and Irys say is what they actually mean.

Some tiny tweaks were made to some of the actual content of the book.  Again, we did this simply because we had the chance to make a change, so we went for it. Absolutely nothing changed to the plot. The primary tweaks were deletions of minor, inconsequential details included in the text with the intention of expanding on them later, which we’ve since decided not to do after all. Leaving them in wouldn’t have hurt anything but taking them out really tightened things up.

Amanda and I are unbelievably grateful that we had the opportunity to take the time to take a second stab at releasing Love at First Plight. This isn’t something we’ll be doing again.  The Perspective series books won’t be ever-changing novels. That said, we’re proud to know that the story we love with all our hearts is now told in the way we’d meant it to be from the start.

You can also preview it below!