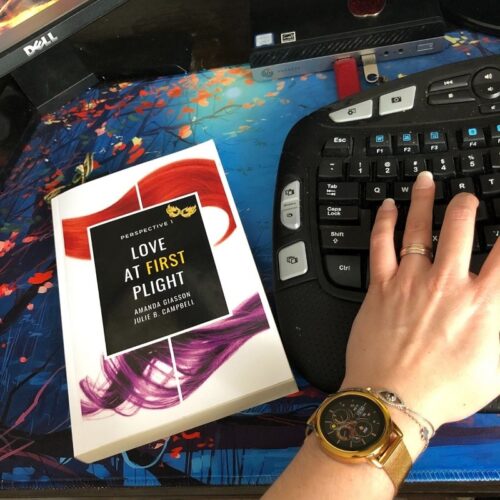 One of the questions Julie B. Campbell and I (Amanda Giasson writing here❤️) are asked the most frequently is: “How do we write the Perspective book series?”

Many of our readers are curious to know the methods we use to co-author our novels and how it’s possible that we’ve managed to successfully do it for so many years and remain best friends Hahaha!

If you’re curious to know the answer to how we write the Perspective series books, read on. 😊

How the Perspective Book Series Started

What eventually evolved into the Perspective book series began as a fun online chat using ICQ instant messaging (“Uh-Oh!” and “Incoming Chat Request” will forever be nostalgic sounds for me LOL! – Also, shout-out to anyone who remembers using ICQ!).

Originally, we used chat programs – starting with ICQ – that had an Internet Relay Chat (IRC) feature. This feature allows you to see what the other person is typing as they type it in real time to provide a more immersive and real-to-life conversation feeling.  IRC was amazing for the way we liked to write because it allowed our characters to respond to one another as the conversations and actions were happening.

Over the years, we’ve used multiple programs with the IRC feature

Eventually, ICQ lost the feature we needed. We were then lucky enough to find XChat, which in all honesty was a little quirky, and we were never overly wild about using it. Still, it was better than nothing. When XChat could no longer suit our needs, we were lucky enough to find a legacy version of AOL Instant Messenger (AIM) with the IRC chat function.

Although we were able to use this program for the first three Perspective books, when we were ready to start the fourth novel in our series, So On and So Fourth, AIM decided it was time to lose the feature we needed, and we were left without a real-time chat option.

You might be wondering, why we don’t use traditional texting and instant messaging (e.g. Facebook Messenger, WhatsApp, Discord, etc.) programs. The reason is that we’ve tried similar programs in the past, but it doesn’t provide the immersive experience we want.

At first, we weren’t sure what to do after we were IRC AIM-less. So, we tried chatting using regular instant messaging via MSN and AIM but never liked it. The trouble is that Julie would have to wait until I’d hit enter before she could read and respond and vice versa. The delay simply isn’t an effective way for us to create our stories. Being immersed in the moment is what makes it fun for us and what makes our storytelling unique.

Fortunately, a good friend of Julie’s (thank you Elizabeth!❤️) gave us the idea to use a program which provides us with the same overall real-time writing experience we like. This platform (which I won’t name here for the sake of avoiding making us a target for hackers 😜) is the one we continue to use for chatting today.

Even now it amazes me that what originally began over ICQ as a fun hobby when we first met as friends, continues to be the same writing technique that we use 20+ years later to create the Perspective book series.

How We “Chat” the Perspective Book Series

Aside from a few minor exceptions, most of the characters my protagonist, Megan Wynters, converses with are written by Julie. Likewise, I write the majority of characters with whom her protagonist, Irys Godeleva, interacts.

It’s kind of like roleplaying, only in a text-based format. For instance, if the chat is focused around Megan’s side of the story, I’m in the role/mindset of Megan, thinking, responding, and reacting as her to other characters or situations in real time as it unfolds. Meanwhile, Julie is in the role/mindset of all the other character(s) interacting with Megan and is also controlling most of the events directly impacting Megan.

To give you a clearer idea of what I mean, I’ve included two images of what our chats looked like in AIM. Both are from the first book in the Perspective series, Love at First Plight. The first image shows a conversation between Megan and Thayn Varda and the second shows a conversation between Irys, a Sylizan baker, and Imery Godeleva.   Each Section is followed by the corresponding scene in the book, to show you how we transform the chat into the story.

As you can see, we either use brackets ( <   > ) or asterixis ( * * ) to indicate the thoughts of our characters and the descriptions that correspond with the situation. In addition to the conversations, these bracketed thoughts, reactions, and descriptions later help us to recreate the scenes through the first-person perspectives of Megan and Irys as we write their stories for the novel.

How We Convert the Chat into the Story You Read

After we’ve chatted out all the scenes for the novel we’ll be writing, we then take what we’ve created and put it into the first-person perspective of our characters as seen in the examples above.

At this point in the writing process, we may make necessary changes to the initial chat documents we’re working with to better suit the stories as we write them into a novel-based format. These changes may include:

Any changes we make are done to ensure Megan and Irys always remain the primary focus of their own stories, to ensure their stories flow properly, align, and complement one another, and to ensure that the stories we tell make sense to you (our reader).

It Takes Two to Write the Perspective Series Books

There you have it! That’s how Julie and I write the Perspective book series. In essence, we real-time chat together to create the bones of the story and then separately write each character’s side of the story to flesh it out.

The Qarradune universe simply wouldn’t exist without the both of us. It’s a joint effort from the moment we create our first chat to the point we publish its respective novel. We absolutely love writing this way together, and I hope you’ve enjoyed learning about how we do it! 😁❤️