Mez Basarovka: Journal of a “Spoiled Prince” is the second novella in the Perspective book series. If you want to avoid spoilers – and want to make sure you’re reading it in the right series order, we recommend opening up this journal after you’ve read the series up to So On and So Fourth.

If Mez Basarovka is your favourite Kavylak Warrior in the Perspective series, then your book set can’t be complete without his journal!

It’ll Mez With Your Mind… 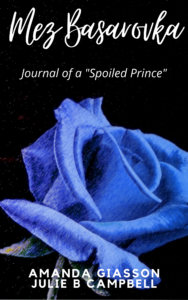 How did a “Spoiled Prince” from Dmevjekya become an officer in the Kavylak Military’s elite Warrior faction? Take a look at who he was before he became a Warrior and how he came to join the military. Read Mez’ story in his own words, from his own perspective.

Though Mez keeps this journal tucked safely away from prying eyes, don’t worry, nobody will know that you’ve been able to sneak a glimpse – or two or three – at these pages. You’ll be completely safe from that powerful Warrior skill, even as you fall victim to his style, wit, and surprising story.

More About the Novella

You’ll get the most enjoyment (and fewest spoilers) from this book if you read it after So On and So Fourth in the Perspective series.

Get your copy of Mez Basarovka: Journal of a “Spoiled Prince” at your favourite online bookstore.